MUSIC: SKECHY – FOR YOU | Tunez NG 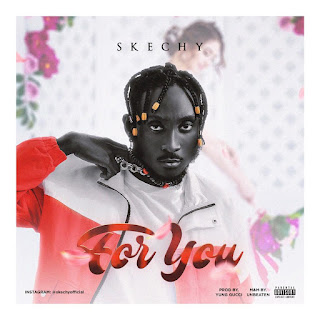 SKECHY-BIOGRAPHY
Skechy is a Nigerian singer – songwriter with a highly resonant music vibes with influences across Afrobeat, High-life, RnB, Dancehall, and Fuji. His brand of Afropop is what he described a new century vibes characterized by mild energy and captivating performances with catchy lyrics that makes people of all ages sing along. His artistic vision is to create music brand that will connect with audience with the aim of entertaining, inspiring and empowering virtually every aspect of Nigerian life and culture. A music style termed “bangers and balances”
Born in osun state State,Nigeria into a Muslim family, Oyeyemi Abdulhakim Olaide, Skechy has his family root from Ikire in Osun state, Nigeria. Growing up on the street of Ikotun, His musical journey began at a young age been influenced by Fuji musicians such as King Wasiu Ayinde Marshal, Adewale Ayuba, and singers such as 2face, Styl Plus, Wande Coal, Westlife, Backstreetboys, and James Blunt. Skechy, the name was coined from his artistic ability to draw, a creative path he only that he considered as a hobby.
Focusing on creating a repertoire of body of works, Skechy has released quite number of singles, covers, and viral videos as an independent artiste since 2010 recently amongst are Unconditional Love (2017), Your Heart (2017), Blessings (2018), Loud (2018), Home Coming(2019), Good Vibes (2019). He performed at Goal fest, One Lagos fiesta (2017 and 2018), and featured on TVC’s Wake Up Nigeria Morning Show. He is currently building a great followership of music fans both online and on – street and a reputation for making his audiences ask for more with his live performance.
As an undergraduate of Business Administration, University of Lagos, Skechy is setting up his gaze to show himself as a conscious entertainer with his upcoming release song titled For You, an Afrovibes love tune centred on sacrifice, dedication and making the small things count in a relationship and life generally. For You captures the essence of love in a contemporary fast changing world. The song was produced by Yung Gucci, mixed and mastered by TeeDot unBEATen for DreamOut Music.
Skechy co-host a radio show on Nigeria info 99.3 FM, Do not Drop the Mic, a music freestyle talk show, every Friday
DOWNLOAD MP3