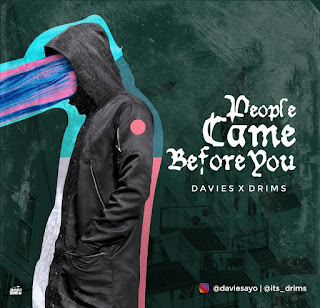 The highly anticipated Trap Music that is set to take over the music industry by Storm is Finally here.
Ladies and gentlemen i present to you “People Came Before You” by Ayomide Davies popularly known as Davies featuring Drims
Davies is a fast rising Rap and Trap star.He has been featured on many hit tracks and now finally releasing his own First Track
He definately takes his music to another level with this beautiful song that is set to explode in the music industry.
His Debut track is titled “People Came Before You” produced by Collins Shezzo. This dope tune would surely leave you craving for more.
DOWNLOAD AND SHARE BELOW AS WE TAKE NIGERIAN MUSIC TO THE NEXT LEVEL
Audio Player
00:00
00:00

0 Response to "Davies X Drims – People Came Before You"